I’m living in a van because …

I hate the idea of paying rent and it facilitates my other passions. Living in a van helps me get after storytelling and outdoor adventure full-time.

I like to think of my relationship to van living as part of a long tradition of climbers, ski bums, kayakers, etc. living out of their vehicles in the pursuit of infinite stoke.

Building a cabin. I’m really jazzed about the idea of expanding on gears that the van build set in motion and would love to construct a more permanent and comprehensive residence. Since most of my work is in the digital realm, I get a real kick out of the tangibility of fabrication and construction. I’m not quite sure where I’d want to build it just yet, but maybe the van is a bit of an instrument to help me figure that out.

Tell us about your van’s travels.

For my first few months of van living, I was yoyo-ing back and forth between contract media work in New Jersey and spending a lot of time in upstate New York. This last year was my first season of ice climbing, and I really dove into that headfirst trying to spend as much time parked under ice crags as possible.

This summer I’m getting away from the humidity of the East Coast and am living out West until September. Since gas mileage isn’t exactly the van’s forte, my preferred method of travel involves loading up the van with up to 5 people for extended trips to keep costs low. So far this year, the van has been from Key West to Seattle; ticking off whitewater classics, mountain bike meccas, and climbing test pieces along the way. What was life like before living in a van?

I was saving up for a down payment on a house with my girlfriend at the time. I really didn’t want to be paying rent. After a pretty traumatic 2-week self-supported river trip through the Grand Canyon, we decided to call it quits after five years and I pulled the trigger on the van I’d always been dreaming of. The van is sort of a renaissance for me. I was feeling pretty old before the van—I’m feeling so much younger now. What has surprised you most about living in a van?

Initially, I thought getting through the winter would be pretty hard; but, I can idle the van for 10 minutes to bring the internal temperature up to comfortable level and simply sleep under a ton of blankets to stay warm overnight. It’s actually some of the better sleep I’ve ever gotten, but getting out of bed in the morning can be pure misery with how cold it usually is beyond the blanket cocoon when I wake up.

Humidity, on the other hand, is a bit harder to deal with, so I’ve escaped to drier parts of the country for the summer months.

Do you have any nuisances?

Gear storage for big stuff like bikes and kayaks can be a pain in the butt, but nothing is worse than having a stomach bug and no consistent plumbing. Sometimes you just have to throw in the towel and get a hotel room or find a friend to stay with till you get better.

How do you store all your stuff?

I store my bike on a rack mounted to the front of the van and have a pretty elaborate roof rack for my kayak. There’s a storage bin on top where I keep stinky and wet stuff for when I don’t have a chance to dry things off before storing them. If there’s one thing I’m proud of, it’s that my van doesn’t stink. Tell us about your wildest van party.

I won a Red Bull photo contest this past winter and they wanted to fly us out to Buffalo, New York. I offered to drive out if they comp’d the gas and they ended up covering us for a 5-day mini-trip around New England. We jokingly refer to it as our “Red Bull Sponsored Trip.” After a few days of climbing, my buddy came through with some super clutch beta and we wound up staying at a pajama party sleepover with 15 girls from the University of Delaware Outing Club. It was like a scene from a movie. The next day, when the girls took off to go skiing, we spent the morning at the house chilling with the host parents for a few hours. Deluxe.

Then there’s the time we sorta got adopted by a 30-person Mormon family in Yellowstone out for a family reunion. After spending a few days with them, we convinced them all to pile into the van and now the van occupancy record stands at a stout 32.

What’s the best feature in your van? If you had a magic wand and could do anything, how would you improve your van?

Fridge, air conditioning, and no need for gas would be nice. I’m also jealous of the Sprint build-outs that feature bike storage under their beds.

What book(s) have you been reading?

The Emerald Mile. It’s a curious book in terms of format. Content-wise, it is much like a textbook covering the human history of the Grand Canyon, but it features some of the richest language I’ve ever read on the topic of river navigation and the southwest. A delightful marriage of elegant form and hard facts.

Do you recommend van life?

The idea of living in a van has definitely exploded in popularity over the last few years, but it’s something people have been doing for a long time now. I’d recommend living in a van only if it’s facilitating a life dedicated to the pursuit of your passions. If you’re a skier chasing the endless winter, then go for it! If you’re a climber who lives to be in Indian Creek for Thanksgiving, Yosemite in the spring, and Squamish in the summer then you’re probably already living in a van. 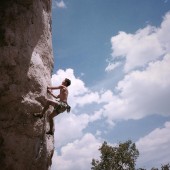