I’m living in a van because …

When I bought my van it was kind of the perfect storm.

For about a year I had been planning to get a Sprinter and convert it myself so I could go on a road trip and explore the US. I had back surgery two months before I bought the van that was supposed to have a recovery time of 1-2 weeks, which turned out to be 3-4 months.

I wasn’t able to work at the time and my brother and his girlfriend were gracious enough to let me stay with them for a couple of weeks. By the end of the first month, I was low on money and started to feel like I had overstayed my welcome. I decided I was going to sell my car and search for a Vanagon to get a taste of van life, and also be able to recover at a low cost.

I expressed my feeling to my brother who told me, “I think its crazy but if you want to do it just make sure you get one that’s mechanically sound. I don’t care how long it takes, don’t buy the first POS you can find just to get out of here. It’s not that serious.”

I was also very into climbing when I bought it, and it’s great for climbing trips! What has surprised you most about this lifestyle?

In all honesty, I was completely shocked at how people were not only accepting of it but how many people say things like:

“That’s so awesome! does it have, or do, whatever” or “I’ve always wanted to do that, the freedom to be able to just pick up and leave seems amazing but (insert wife/gf, kid(s), job etc.) and I just couldn’t ever.”

I was expecting people to assume that I lived in some rundown old “free candy” van cluttered with all of my belongings.

I haven’t ever been on the receiving end of any of the stigma I thought I might encounter. I don’t think people are surprised by much these days.

In addition to that, I was shocked to find out how nice life can be without a lot of things.

I grew up in an upper-middle-class family where we had so much shit we were basically falling over it. I had a closet full of clothes but felt like I never had anything to wear, pantries full of food but I never wanted any of it, every tech gadget imaginable but I was always somehow bored.

When I first moved into my van, I packed this thing to the brim. I have since simplified down to a three-drawer organizer, the small closet in the back, the roof-box, and an air-conditioning cabinet that I gutted. Do you have any nuisances?

My van only suffers catastrophic breakdowns (anything I can’t fix with tools on the side of the road) on Thursdays or Fridays. Now while I do have just about the most accommodating mechanic on the face of the earth, he is closed on weekends and some parts are special orders, so there is only so much he can do.

I haven’t ever been stranded or had to spend the night in his parking lot but it does add an element of stress to the equation of having to call him on a day where he could be packed and say “Hey, its Jonnie, green Vanagon. It’s on a tow truck headed to your shop for _____.”

He always says the same thing: “We’re fucking packed, I can’t make any promises other than I’ll do my best.” He has stayed open late on more than a few occasions for me and also done three transaxle swaps, same day.

Aside from that, I don’t have anything really too crazy. I would love to have an air-conditioner that actually worked. It would also be nice if this thing had some more power, I joke that my van doesn’t have a set 0-60 time because there are too many factors like hills or headwinds.

I think hitting a bug on the freeway would slow this thing down.

I just say it’ll get there eventually. Do you have any tricks for organization?

I don’t have a “trick” but if you live in a van you will become incredibly good at playing Tetris with your stuff and knowing what will fit in a certain area or gap.

I had to figure out a more space-efficient way to fold my clothes. I try to use every bit of odd space. I store books in the small area between the top bed and pop top. I keep my watch, pocket knives, and other small things in between the folded upper bunk, a solar fan in the skin of the sliding door, random odds and ends under the front seats.

When you spend so much time in a small space you’ll have breakthroughs on how you can do something better. I go through everything I have every three months and remove things I haven’t used or that take up too much space. I guess for me it really just came down to realizing the difference between want and need and finding a balance. What’s the best feature about your setup?

I would definitely say it’s my auxiliary power setup.

I spent months researching what to use and the most efficient way to use it. I ended up going with 2x100w mono-crystalline solar panels

made for boats to charge my auxiliary battery while the engine is running, a 1000w power inverter

I am actually plugged into my inverter right now charging my laptop and a rechargeable battery that I use to charge my phone when I am away from the van for long periods of time sitting 30 feet from the ocean. Oh, and it is providing constant power to my refrigerator.

What is the most essential item in your vehicle?

As much as it pains me to say this, my tools are the most essential things in here. I could do without all the creature comforts but I have had so many little things I have been able to take care of on the side of the road by having them. When they’re not enough, my AAA Premier card is always handy.

Otherwise, it’s so nice to have a refrigerator. It’s great to be able to keep food and you’ll never realize how nice it is to get in a hot van and be able to have cold water. I used to use a cooler but it was awful! Everything was soggy, water would work its way inside sealed bags, and I had to get ice every other day.

If you had a magic wand and could do anything, how would you improve your vehicle?

I would do a TDI turbo diesel swap, give it some air-conditioning that would keep a polar bear happy, 4wd conversion, reupholster the bed with better foam, and fix all the squeaks and rattles. What books have you been reading?

I just finished Spillover: Animal Infections and the Next Human Pandemic

by David Quammen and am currently splitting my time reading Extreme Ownership: How Navy SEALs Lead and Win

by Jocko Willink and Leif Babin, and Arguably: Essays by Christopher Hitchens. Any last words for those living on the road? What about people not living this lifestyle?

For people who are thinking about doing it, I would say it’s totally worth it.

I have grown more as an individual in this van than in any other place I have ever been in my life. That includes nearly six months spent in the Uinta Mountains in a wilderness program and seven months living on a beach in a boarding school in Samoa where your growth dictates how soon you go home.

You can learn anything you want. In my case with a bill of nearly $10,000 after a year for repairs and modifications, I definitely can’t say that I have saved money, but I can say without a doubt that I wouldn’t have wanted to spend the last year anywhere else. 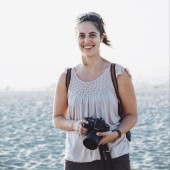